Daebrezhon Fisher Back to Blog Articles

Daebrezhon Fisher is a student on Legacy Hall. He is President of the dorm in the Student Government. All the way from Maryland, Daebrezhon’s biggest struggle is handling his emotions away from his family. Through leadership and listening to the staff and peers around him he has found a way to channel those emotions into something positive. He helps the peers around him who are also homesick, and who also want something better for themselves. Daebrezhon played running/defensive back on the 2018 football team and received 2nd Team District 7 Class 1A Honors. He was also a team captain and helped hold the team together. Daebrezhon believes in a sense of family and coming together to accomplish goals. This was apparent on the field as well as back on his dorm. Daebrezhon continues to use his leaderships skills he learned at the Academy in a positive way to help get his dorm and campus in a good spot. Listen to Daebrezhon’s share his story on our Youtube channel. You hear in his own words the work he has put into changing his life because of the opportunities he received at Woodward Academy. 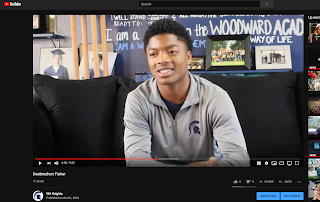